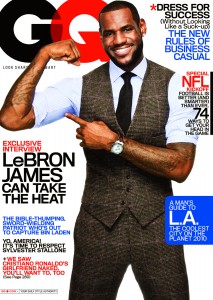 After being subjected endlessly all summer to everyone giving their opinions on LeBron James and his decision to leave Cleveland for Miami it’s refreshing to hear what the young man himself has to say about all the madness that transpired in the latest issue of GQ.

J. R. Moehringer was one of the few who were given access to the superstar this summer over a course of several interviews before and after “The Decision” and the following sheds a bit more light into the newest member of the Miami Heat.

James had some choice words to say about Cleveland Cavs owner Dan Gilbert:

“I don’t think he ever cared about (me). My mother always told me: ‘You will see the light of people when they hit adversity. You’ll get a good sense of their character.’ Me and my family have seen the character of that man.”

Gilbert’s open letter to the Cavs fans had a direct effect on James and how he’ll approach playing against them this season. “I do have motivation,” he says ominously. “A lot of motivation.”

Having said that (and assuming Gilbert sells the team in the distant future) James doesn’t completely shut the door on a possible reunion in Cleveland, although it’s probably just damage control after all the backlash.

“If there was an opportunity for me to return and those fans welcome me back, that’d be a great story.… Maybe the ones burning my jersey were never LeBron fans anyway.”

In the first interview for the article before he announced his decision to join Miami, James stated, “My emotions won’t be involved and will not affect what my decision will ultimately be.”

However, he wasn’t about to be swayed by those in his circle of friends, family and confidants though he claims never gave him any recommendations on where to go anyway. James says of his inner circle…

“You know, my family and friends have never been yes-men: ‘Yes, you’re doing the right thing, you’re always right.’ No, they tell me when I’m wrong, and that’s why I’ve been able to stay who I am and stay humble.”

James also made it clear that his elbow was still bothering him a bit at the time.

“It’s more about proactive than reactive. I go out there and get a hard workout, and I know the elbow is not 100 percent healthy. It feels great, but I’m not going to wait until it hurts to start icing it.”

The most revealing part of the interview is his explanation of the connection between his hometown of Akron and the larger city of Cleveland that may surprise those of us not familiar with Ohio.

“It’s not far, but it is far. And Clevelanders, because they were the bigger-city kids when we were growing up, looked down on us.… So we didn’t actually like Cleveland. We hated Cleveland growing up. There’s a lot of people in Cleveland we still hate to this day.”

Though he’s faced an onslaught of backlash since his decision, James feels great about joining the Miami Heat and his friends and family know it.

“They’re happy to see me happy,” he says. “That’s what they can see in my face. They say: ‘It’s been a while since we’ve seen you look like that.’ ”